Real World Photography Case Studies
On this page you will find a sample list of Inside Out Photography's (IOP) recent commissions, plus some interesting case studies from past years.
It's always a risk showing clients work dating back more than a couple of years, but we believe this history illustrates not only IOP's longevity, but also how Bernard's shooting style has evolved professionally over the Forty Three years.

These are all commissioned shoots which give you an insight into the service we deliver, and how IOP is constantly striving to push creative standards and improve the service we provide to our clients, in the Manchester and Derbyshire areas, North West, Midlands and the wider UK.

The images on this page are from a recent commission for a Stockport based technology client to publicise the rapid expansion of the company and celebrate the opening of a 2nd building.

However due to the orientation of their near North facing newly built building, we had no option but to patiently wait for over 6 months, before re-visiting the site at approximately 5.15am, when the front elevation would finally be bathed in glorious sunshine.

Even then IOP combined 3 different exposures taken approx 15 minutes apart to remove shadows cast by adjacent buildings on the side elevation, whilst retaining the texture effect of the building finish on the front elevation. 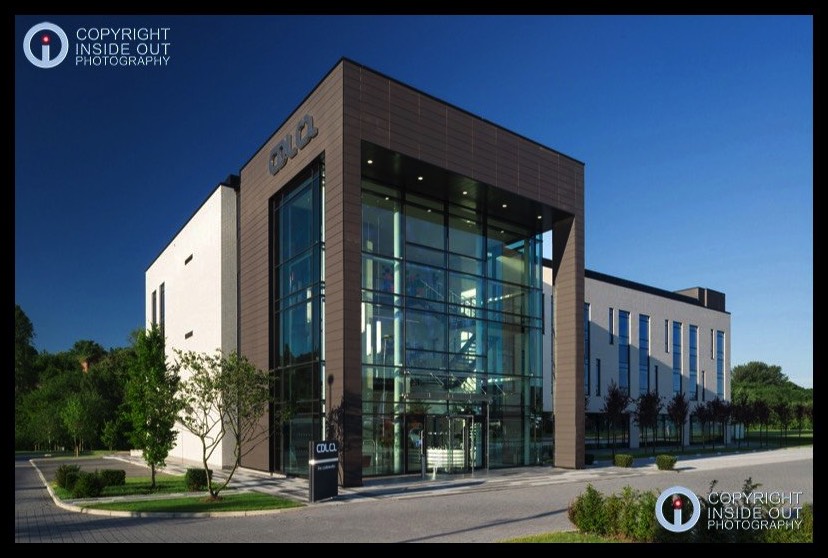 The images on this page were for an aluminium fabrication company specialising in high-precision components for the automotive, and aerospace industries.

Some of these components were fairly small with very fine intricate details which from an engineering perspective were essential to show. IOP used specialist perspective control optics and selective light-painting to bring these details to the forefront.

The images below are for the long established house building company of P Casey & Co Ltd, based in Manchester North West UK.

The brief was to capture the atmosphere and build quality of this very modern, airy, open plan interior living space.

These aerial images were commissioned by Manchester United Football Club, Inside Out Photography's oldest and most loyal client, and a small selection from a library of over 320 aerial views and 26 flights, dating from 1992 to 2012.

Generally, the changes we all witness in our surroundings happening gradually and can go almost unnoticed. It is easy to forget just how much things have changed over a longer period, until you are presented with a series of historical images, aerial photography is particularly effective in highlighting these changes.

Not only is the expansion of the stadium impressive; equally fascinating are the developments in the surrounding area, with some roads and buildings disappearing, while new ones spring up!

The 'People' images shown below were to be used primarily in a recruitment brochure which needed to firmly target younger candidates.

IOP adopted an informal visual approach to reflect the clients more relaxed attitude to their workforce, and the corresponding work-life-style ethos of the company.

The images below are a small selection from a 2015 commission for IOP’s most loyal and longest standing client; Manchester United FC, and are of the constantly evolving MUFC Carrington training Facility.

The Photographs below are from a 2010 and were commissioned by SLG a leading Manchester based advertising agency for their client Polypipe.

It was very important that our creative approach didn't compromise the primary function of the images, which was to clearly capture the key step-by-step installation process for Polypipe's IOP’s under-floor heating system, to be used in the installation guide.

IOP, have been providing ultra-high resolution images of Old Trafford since 1992.

These images are sent all over the world and reproduced at wall-size so fans can have their photo taken seemingly standing in front of ‘Old Trafford!

IOP use a high-end 36.3 meg pix digital VR camera system coupled with professional image stitching software, producing panoramic files of 800mb + for a 120˚ and 3gig + for a full 360˚.

You can get an approximate idea of the level of detail, in the blown-up section below.

Hotel Photography
The images on this page are a small selection from a 2014 commission for a hotel group client covering six hotels from the Midlands up to Edinburgh.

The key mission here was to capture the quality of the recent refurbishment of the hotels in this chain and show the interiors looking as warm, luxurious and inviting as possible.

We used a technique called light painting, of selectively illuminate larger open-plan interiors even with glossy reflective walls and to add life and texture to small details such as furniture and curtain fabrics.

A Blast From The Nations Past - The Legendary Factory Records - Manchester
The images on this page are from one of Inside Out Photography's first ever jobs over twenty-six years ago!

Taken in 1991 these show the 'then' brand-new premises of the legendary Manchester based 'Factory Records'.

Sadly the company ceased trading only six months later, making these interior images of this iconic player in the music scene of the 80s & 90s quite rare, which is why on this occasion they are protected by an additional embedded copyright logo!

The architectural views are from 2007 and show the 'then' newly built North West Headquarters in Stockport Greater Manchester.

The training images are from 2008 and show actual training in progress at the St John Ambulance Oldham office.

Astech Projects - Industrial Robotics
The images below are from a couple of recent shoots for a technology client in the robotic automation industry.

Friends Of St John The Baptist - Tideswell
Friends of Saint John (FoSJ) is a charity established in 2017 with the express aim of raising funds for the restoration and maintenance of the six hundred year old medieval church of St John The Baptist in Tideswell, also known as the 'Cathedral of the Peak'.

This pro-bono image library took Forty-Five days photography and computer processing, revealing a whole host of previously difficult, if not impossible to see details, revealing carvings of half beast half human hybrids over 600 years old in poorly-lit recesses many metres above the ground. More info.

Tideswell Food Festival
Tideswell has its own annual food festival held on the last Saturday in April. The images below are from our 2018 event. More info.

The images below are a record of the progress of this transformation for future historical reference from a collection of approximately 200 images. More info.

Wakes Week
Wakes-Week is a Derbyshire tradition that dates back to the 1600s and was re-introduced in Tideswell after World War Two in 1946. Over the course of a week, the Wakes committee raises money through a number of fund events culmination in a carnival on 'Big Saturday'.

These funds are then distributed to various groups and associations in the village. More info.

Wai-Yin
Wai-Yin is a Manchester based charity offering a wide range of support services primarily to the Chinese community in an around Manchester.

The images below are a selection from a Two Week pro-bono shoot dating back to 2012. More info.

These images are from their October 2018 production of Ronald Harwood's 'The Dresser'.More info.

Your image is your future: trust it to a true professional!

Inside Out photography are award-winning commercial photographers operating from
Manchester and Tideswell, serving the North West, Midlands, UK wide and central Europe